END_OF_DOCUMENT_TOKEN_TO_BE_REPLACED

5 Things Black Friday and Cyber Monday Taught Us About Ecommerce

As most experts predicted, Black Friday and Cyber Monday deals in 2016 brought in a staggering amount of revenue for companies in all sectors, from tech, to furniture, to apparel. While American shoppers stocked up on gifts for their loved ones - and themselves - this holiday season, retailers and brands once again raked in the revenue, earning almost $7 billion in online sales on Black Friday and Cyber Monday alone. So what can the ecommerce community learn from the shopping spree? Keep reading to check out our 5 biggest takeaways!

Ecommerce’s rise to retail prominence has been in the works for years now, but the 2016 post-Thanksgiving shopping bonanza was a particularly historic event for the industry. For starters, Cyber Monday ($3.45 billion in sales) and Black Friday ($3.34 billion in sales) were the two biggest online shopping days ever, thanks in large part to the growing number of traditional stores that have embraced the benefits of selling on ecommerce channels. A shift towards shopping via mobile devices was also a key factor in cyber’s exceptional retail performance, as smartphones and tablets have allowed retailers nearly unmitigated access to their customers.

Perhaps even more telling for the future of commerce, 2016 was the first year in which a clear majority of consumers chose to shop electronically rather than in stores. According to the National Retail Federation, 44 percent of Americans surveyed said they shopped online over the weekend, while just 40 percent shopped at brick-and-mortar locations. Last year that number was closer to 50/50.

Online shopping numbers have been climbing steadily year-over-year and have shown no signs of slowing. This year’s post-Thanksgiving sales rush, however, may go down as the real turning point when Americans chose the web as their main shopping channel. 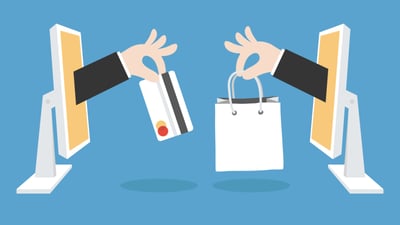 2. Big-box retailers are leading a marriage between brick-and-mortar and ecommerce

Just because ecommerce is taking control of retail doesn’t mean that traditional stores have to be left out in the cold. Indeed, this holiday shopping season has shown that the savviest brick-and-mortar stores are actually taking advantage of the digital revolution, finding ground-breaking, modern ways to connect to consumers online and sell a wider variety of SKUs. Companies like Walmart, who bet big on ecommerce  this past August by purchasing 3-year-old startup Jet, put considerable effort into maintaining an optimal product mix online in the days surrounding Thanksgiving, offering better prices to stay competitive with the more experienced ecommerce players. Meanwhile other big-box stores, like Target and Kohl’s, reported record online sales this holiday season. While online giants like Amazon and Wayfair certainly performed well enough in their own right, the success of the traditional retailers bodes well for competition in the ecommerce space moving forward.

As is so often the case in business, adaptability has proven to be the key trait among retailers who’ve managed to maintain their success in the face of the ecommerce movement. Rather than pushing against the trend, innovative brick-and-mortar, or “traditional” retailers like Nordstrom, Foot Locker, and Crate & Barrel have developed ecommerce marketplaces of their own. Not only does this connect them to a wider range of consumers, but it allows them to offer those consumers an endless aisle of products that can be dropshipped to their doors at the push of a button. That’s allowed them to remain competitive not just during the holiday rush, but year-round.

3. Mobile is more important now than ever for ecommerce

Speaking of innovation, mobile continues to dramatically grow its presence in ecommerce. Per TechCrunch and Adobe, Black Friday and Cyber Monday were the first days in retail history to drive over $1 billion in revenue from mobile sales. And while 65 percent of all Cyber Monday purchases were made on desktop, mobile actually accounted for a majority (53 percent) of overall site visits. While some consumers may still be more comfortable checking out on their desktop, it’s clear that overall ecommerce shopping is starting to shift in favor of mobile.

Retailers are embracing the trend too. A number of big names, including Wal-Mart, Kmart, Kohl’s, and Target, have launched mobile apps in recent years, insuring that buying their products is just as easy as viewing an Instagram post. Those efforts – plus non-app mobile shopping – have paid off. 60 percent of Target’s Cyber Monday online sales and 60 percent of Wal-Mart’s Black Friday online sales came from mobile, and countless other retailers saw an increase in traffic and conversions via smartphones and tablets as well. As we move forward in 2017, it’s clear ecommerce professionals need to do all they can to evolve their companies with mobile.

While the emphasis for ecommerce was originally focused more on Cyber Monday, Black Friday shoppers are definitely not relegated to brick-and-mortar deals these days. In fact, the day after Thanksgiving generated $3.34 billion in online sales, just $110 million less than Cyber Monday did. Black Friday online sales revenue was an impressive 21.6 percent increase from last year, almost double the year-over-year growth rate seen by Cyber Monday. What’s more, Black Friday brick-and-mortar sales actually decreased by one percent this year. If the trend continues, Cyber Monday will likely be unseated as the number one online shopping day.

5.  It’s hard being so popular

Despite all the evidence pointing to a huge influx of traffic coming to their websites, multiple retailers experienced technology failures over the Thanksgiving weekend. Customers faced website outages, glitches, and error messages when shopping with stores like Macy’s, QVC, Old Navy, and Williams-Sonoma. While we can assume server overload was the main culprit, what’s most important for the big picture is that, as Forbes noted, the afflicted retailers likely lost millions in unrealized sales revenue.

From external website operations, to dropshipping automation, product management, and the like, every historically tricky aspect of ecommerce is quickly being revolutionized and remedied these days. Hopefully 2016 will be one of the last years in which holiday shopping is hindered by technological inadequacies.

There you have it. It seems to happen every year, but once again statisticians and retail experts were wowed by the numbers seen during the Thanksgiving shopping spree. Ecommerce has officially arrived, and it’s here to stay. Brands and retailers who haven’t adapted better jump on board before it’s too late.